Polyurethane foam is primarily a cellular plastic. The properties of this die depends mainly on two factors, the structure and composition. The cell structure is formed by the action of blowing agents. The more the structure is fine and homogeneous, the more mechanical properties of the polyurethane foam is good. The chemical composition also between largely in its mechanical strength. A homogeneous mixture stoichiometric gives the polyurethane foam its optimum mechanical properties. Nucleation (air, CO2 or nitrogen) enters the like using a part of the mechanical expansion. When physical agents are used to form the cells, the gas phase of foamed plastic is chemically identical to that of the blowing agent. This technique has encountered difficulties of implementation, recently solved by adding the function of the miscibility of gas into a liquid through a set of changes associated with a system for mixing and homogenisation pressures of high performance.

The direct effects of nucleation:

Action on the chemical composition: The principle of nucleation is to refine the cellular structure of the foam by a combined set of actions performed on the polyol. A better mix the polyol with additives and incorporate air into very fine particles increases its reactivity, which significantly improves the quality of mixing the isocyanate / polyol and thereby optimizes a stoichiometry reaction. This feature allows a better crosslinking improves the mechanical properties of the polyurethane foam. 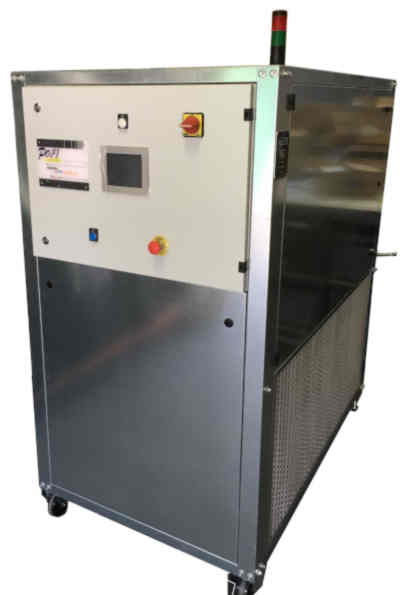 This machine consists of a steel framework holding all the components needed for its op-erations, such as motor pipes, pumps, valves, tanks, control panel and instruments. It is a fully autonomous system, controlled via a tactile colour screen.

The touch screen control system provides start-up, production and weekend modes as well as constant display of the measured values, faults and help.